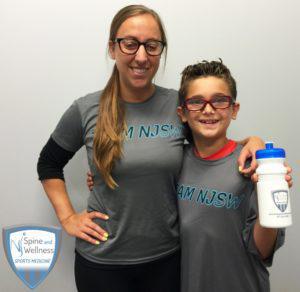 Team NJSW members come in all shapes, sizes, and levels of athletic ability. This month’s patient spotlight may be of the compact variety, but he sure does pack a punch! Jake is a 10-year-old multisport athlete from Manalapan, New Jersey. He actively participates in tackle football, soccer, lacrosse, and basketball. Catch your breath thinking about all of that activity. Ready? Let’s continue. A few weeks prior to the start of football season, Jake’s father Seth received an email from our sports medicine team elaborating on the importance of baseline concussion testing and encouraging parents to get it done for their children before the season started. Already hesitant to let his son play football, Seth agreed that it would be very important to have Jake baseline tested in case a concussion were to occur.

Shortly after football pre-season camp started, Jake was playing in a basketball game at the rec center. He jumped up for a rebound, lost his footing on the way down, and hit the ground. Jake attempted to get up and walk off of the court but stumbled back to the floor. Luckily, a spectator who happened to be a medical doctor was watching and offered to examine Jake after his injury. The doctor noticed something was not right with Jake and advised them to call EMS who later took him to the hospital.

“Any parent who has a kid active in sports should have their child baseline tested. To have the peace of mind while they are out there playing is priceless. We are very comfortable knowing that you guys are here for us.”

Seth never thought that Jake could have gotten a concussion playing basketball. Of all of the contact sports that Jake plays, basketball was the one that worried his father the least. Realistically speaking, concussions can happen at any time and may not show symptoms right away. Following Jake’s injury he immediately entered into our concussion program where Dana, one of our staff athletic trainers, oversaw his care and took him through our Return-To-Play protocol. The first few days involved rest and re-taking the computerized concussion test to assess his condition. When Jake became symptom free and tested out, he progressed to light activity, and then forward to sport-specific drills. While in treatment, Jake still attended his football team’s practices but only participated in walkthroughs. Jake responded so well to his treatment that after just 10 days (including a few extra days just to be safe) he was back to full-go at practice. In addition to working with Dana, Jake says his favorite part of treatment was using the treadmill. It actually helped him overcome a slight fear of them following an incident when he was younger. Seth credits our staff with providing his son the exact care he needed to get back onto the field safely. He states “the baseline testing put me at ease. If I didn’t know that Jake’s balance wasn’t great before concussion, I would have freaked out in the hospital when they did his balance exam.” Baseline testing can help parents understand more about their child and the process of a brain injury. Jake’s story is a perfect example of how getting baseline concussion tested can get your child back on the field quick and safely. Oh, and Jake requested I add his stellar quote:

“NJ Spine and Wellness is the best!”