skip to Main Content
Sometimes you say good-bye, and sometimes it’s “see you later.” Two years ago, Danny entered our facility (back when we were in a small house office) with some pain in his neck. He completed his treatment successfully and went on his way pain free. Little did I know, we would meet again. A few months ago, during a volleyball game, Danny went low to bump a ball and felt a twinge in his neck when he made contact with that ball. Danny wrote it off as nothing serious, even when he woke up the next morning with some soreness. “It’s just normal, it will resolve itself.” We’ve heard that before, and like many other stories we’ve heard, it didn’t. In fact, Danny’s pain worsened over the next few days to the point where it was affecting his work and he could not even sleep. The pain began to radiate to Danny’s shoulder, then to his arm, all the way down to his hand. It was time for Danny to do something about this.“I thought for certain I would need surgery before the staff started working with me. But through a dedicated staff of Doctors, Therapists, and Trainers who truly care about each client that walks through the door, they showed me there are MULTIPLE non-surgical options.” 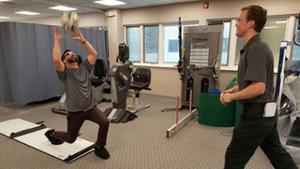 Danny immediately began treatment to fix his neck. “After just 4-5 sessions at NJSW the pain was relieved about 80%, and within just 3 weeks I was back to doing all the things I enjoy: volleyball, bowling, running, etc. Both John and Sean knew how badly I wanted to get back to playing volleyball and designed a realistic volleyball environment inside their training facility that allowed me to rehab all the motions needed for my game. By the time I got back on the court, I hadn’t skipped a beat.” Danny’s plan progressed so well that he went from barely being able to grip a 3 pound ball, to the point that he was performing volleyball maneuvers on the slideboard (an ice-like surface) with confidence! Danny was adamant about giving much credit to Dr. Matt and Mayra also, for piecing him back together. 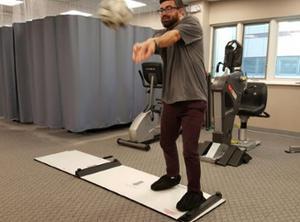 He also mentioned that after being discharged, this time around, he consistently does his prescribed Home Exercise Program 3-4 times a week to make sure he stays this healthy and doesn’t have to experience neck pain like that again. He also continues to see Dr. Matt on a monthly basis for maintenance treatment. Danny is a testament to the type of individualized treatment that we provide to every patient. Tailoring care plans to each patient’s goals and needs is what we pride ourselves on and we could not be more happy that Danny’s results have been extraordinary. Keep it up, Danny B.