skip to Main Content
When you set your mind to doing a task and you are determined, you will do whatever it takes to make it happen. This was the mindset for Lisa when she decided to run the NYC Marathon. 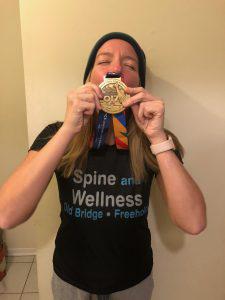 Lisa is from Old Bridge, New Jersey and works as the director of corporate application in the technology department at WeWorks in Manhattan. She is 41 years old and the mother two. Lisa always enjoyed running as a way to not only keep in shape but also to focus, meditate and boost her confidence. She would go on five to ten mile runs and even lost 30 pounds! She slowly started to participate in 5k and 10k runs and decided to run a half marathon and registered for the Disney Princess Half Marathon in 2015. Then, just two months before the race Lisa started to have some pain from her hip down to her knee preventing her from training for the race properly. Her friend suggested that she go for Physical Therapy to help and Lisa drove by the NJ Spine and Wellness office and decided call and come in for an evaluation. She met with Dr. Dan and it turned out that her pain was coming from her IT (Iliotibial) band, which is a band of connective tissue that runs from the outer thigh to the knee. IT bands are prone to being overused and injury, especially with runners. Lisa went for physical therapy 3 to 4 times a week for a month doing planks, hip and glute strengthening exercises. As a result she no longer had an IT band injury because Dr. Dan showed her how to take care of it and she was able to still participate in the Disney Princess Half Marathon.

“I was sad when I finished my treatment here because I felt like I was part of the NJ Spine and Wellness family. The staff was always rooting for me and wishing me the best in my running career. ”

Lisa wanted to up the ante and run for the NYC Marathon. For her training, she ran 30 to 50 miles for 4 to 5 days a week. Just as she was a month away from the big day she started to now feel pain on her left knee. She went to Dr. Dan again and she noticed she had possibly tendonitis and he suggested to that she see an orthopedic. Between herself, Dr. Dan and her orthopedic she had to reluctantly defer from the marathon to keep her from damaging her knee even more. Though she was devastated she continued to work with Dr. Dan and took his advice to train for slower in a longer period of time. She trained for 24 weeks and learned how to slow down to strengthen her hips knees and glutes. She was still determined to continue with the race so a year later, because she deferred she was allowed entry to run in 2017. As a result she ran the marathon and finished in 5 hrs and 20 mins. While it was longer than her pace from last year which was 4 hours and 30 minutes, she finished the race feeling healthy and strong thanks to the training and advice from Dr. Dan. Lisa’s story is an inspiration to all of us to never give up on the goals you have set for yourself!