skip to Main Content
There’s always been a mantra that “macho” sports athletes like football and hockey players are ballerinas on the side. “It helps with their agility and flexibility”. Well in this case, Frank is taking it to a whole new level. A lifelong ice hockey player, Frank made it all the way up to the New York Rangers AHL affiliate team in Binghamton, New York. He also played for the New York Stars in Coney Island. Like any hockey player will tell you, there is nothing like being on the ice. Everyone’s career, however, cools off. Frank played recreationally until he was about 40 and decided is was time to hang it up. Seven years ago, Frank traded in his skates for a pair of dancing shoes, and hasn’t looked back. Frank took up ballroom dancing as his new hobby; he even competes! One night while dancing, Frank suffered a knee injury that was bad enough to put him out of commission. After the pain did not subside and he was still unable to dance, his coach suggested he see an orthopedic specialist. It was later determined that he suffered a torn meniscus. Frank was admittedly “reluctant” to start physical therapy but was “wowed by this wonderful staff of doctors and therapists” ready to help him out with his knee. Due to his inability to dance, Frank noticed that he had gained some weight, which he attributes to exacerbating some chronic back pain. “I have had lower back problems my whole life, but I have always been able to live with the pain since I never thought that anything could be done to address it. I work in New York City and sometimes couldn’t even walk a full block without stopping and leaning up against a wall or looking for somewhere to sit for a few minutes.” Frank now began to lose sleep due to the pain. Our Physical Therapy team now had to address both Frank’s knee and lower back. No problemo!

“I cannot begin to tell you the change that this place has made in my life.” 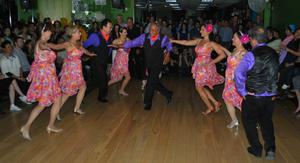 Frank’s team of therapists attacked the pain from his knee and back at the source. They created him a comprehensive exercise program that helped correct any imbalances or weaknesses that Frank may have had. After a few months of various treatments, Frank was back on the dance floor. Over the next few months, he shed the extra weight that his inactivity had put on, and is feeling like a star. Dancing With The Stars maybe? Frank is now back to dancing three nights a week and has no issues walking to his job in the city. In order to keep up with feeling so great, Frank continues to do his home exercise program, which includes many different stretches, every night before he goes to sleep. He states that it is “the only way he can keep doing what he is doing.” Frank notes that his home exercises help him sleep throughout the night, and not wake up sore or in pain. Frank is a prime example of how we use a team approach to get you better faster. He is also our poster boy for how keeping up with your homework will help your results last! Keep dancing away Frankie!