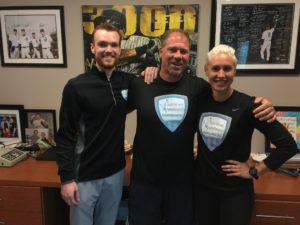 Fatherhood: one of the most rewarding stages of life (or so I’m told). Dads (and moms) are tasked with teaching their children vital life lessons and preparing them for their futures. Many of these lessons take place on sporting fields, especially when Dad is the coach! Thus was the case for Brendan. A proud dad of two young boys: Jack, 6, and Troy, 2; Brendan loves nothing more than wrestling around with, and coaching his boys. This all came to a screeching halt when Brendan’s longstanding back pain took a turn for the worse. Brendan sustained an injury 15 years ago while jackhammering at a construction job. He managed the pain for years, but it eventually reached a point of debilitation. Sidelined from coaching and being a dad the way he knew how, Brendan was ready to seek help. While at the baseball fields, Brendan’s wife Melissa ran into the wife of one of our biggest advocates (and former Patient Spotlight feature), who we had helped through a similar situation. Within a few days, Brendan was in the office and on his way to recovery.

“I owe a lot to NJ Spine and Wellness. To see the smile on my son’s face while coaching him again is priceless.”

Off the bat (pun intended), Jen took the reigns of Brendan’s care and coordinated appointments for imaging and doctor visits. He was set up with his physical therapist Dr. Sam, who assured Brendan that he would be getting better soon and instilled mental confidence in him right away. From day one Brendan learned that there were no short cuts allowed. Our rehab team led by Sean and Dr. Sam stayed on top of him and motivated him to not give up on his physical therapy. Brendan’s therapy included progressively difficult exercises, which Sean monitored closely and modified when necessary. Even if Dr. Sam was busy with other patients she always gave Brendan the individual care he needed, and made him feel as though he was the only patient there. “I owe a lot to her,” Brendan said. He also requested a special shout out to our relentless rehab team, especially: Sean, James, Vinny, Rebecca, Colleen, and Briana for always pushing him to do better. Brendan is now back to coaching his son in baseball and is active out on the field. He looks forward to returning to the hardwood coaching his son Jack in basketball this fall. Brendan had one final (and very important) person to thank before we wrapped up our conversation. “I couldn’t have done anything without my awesome wife, Shorty. The time, energy and patience that she showed me was unbelievable. She was my biggest supporter and cheerleader. I will always be grateful for that.” Thanks are in order for you, Brendan, for being a great patient and an even better dad!